History of the town of Sherborn

Sherborn’s Native American history is little known, but before English settlers moved inland from the Massachusetts Bay Colony and acquired land grants here in the 1640s the area was probably home to members of both the Massachusett and Nipmuck tribes. Until 1674 when it was incorporated as a new town, Sherborn was part of a much larger stretch of land encompassing the Charles River valley between what are today South Natick and Medway. The settlers referred to that larger area by its Native American name, Boggestow.

In the late 1670s and early 1680s, after King Philip’s War, Sherborn’s settlers did what settlers do: they paid the natives for the land title, erected a sawmill, built a meeting house, and hired their first minister. Later they formed a militia, recruited a schoolmaster, and built a flour mill.

The Charles River yielding insufficient hydropower to support industry on a large scale, Sherborn maintained its character as a small but largely self-sufficient farming community through the 19th century. But by the late 1890s steam power, excellent growing conditions, and healthy thirsts contributed to significant cider production; before the turn of the century Sherborn produced a million and a quarter gallons of hard cider annually and shipped it as far away as Texas, Nebraska, England, and Belgium.

Peace and quiet, along with the remarkable beauty of the Charles River watershed, attracted several of Boston’s prominent families in the early years of the 20th century. Their lovely farms and estates, as well as their careful stewardship of Sherborn’s enviable open space, contribute much to the unspoiled nature of this small town.

The businesses that share space on the site known as Sherborn Fuel represent historical continuity. Convenience retail has been here, more or less, since April 1911 when John Jackson and his business partner Michael Levine opened the ‘Sherborn Cash Store’.

John and Mike dissolved their partnership shortly afterwards and Mike and his wife Esther opened their own store farther south on Main Street. (The Levines had both emigrated from what is now Lithuania in 1890. They married in America and moved to Sherborn in 1910, becoming one of the town’s first Jewish families. In their new location the Levines prospered sufficiently to fund their four children’s college education – including Wellesley for one and Harvard for another.)

The Cash Store was now solely John and his wife Nellie Peck Jackson’s to operate. There’s no record of Nellie’s thoughts on the venture, but thus began two generations of Jackson proprietorship, husband & wife. 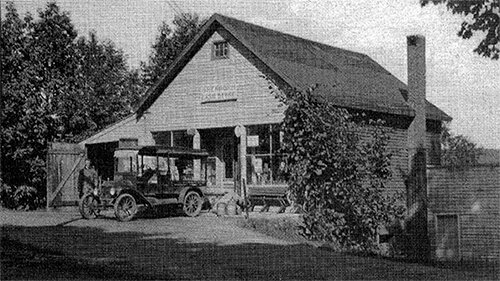 Up to and into WWI

Infrastructure spreads slowly. Sherborn got telephones in 1904 but no electricity till 1911. Dowse High School got electric lights in 1923 but no flush toilets till 1929. Even today, Sherborn residents can only imagine a day when their business district has municipal sewer and water. 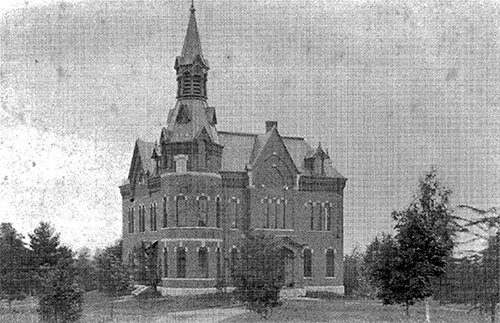 John C. tried Massachusetts Agricultural College in Amherst but didn’t thrive; within months he returned to Sherborn. As John’s wife Isabelle (“Belle”) put it 52 years later – herself a Phi Beta Kappa graduate of Colby College and an astute critic of human frailty – agriculture was “not John’s field. I think the Organic Chemistry courses were too much for him.”

For 5 years Johnny helped his parents in the store. But when the US entered WWI he chose to join his brothers in the war effort. As Belle told the Historical Society a half century later, Johnny told his father, “You’re not going to keep me from serving my country. I deserve the same chance my brothers have. I won’t leave you, Pop, till I have to, but when my number comes up I’ll go.” 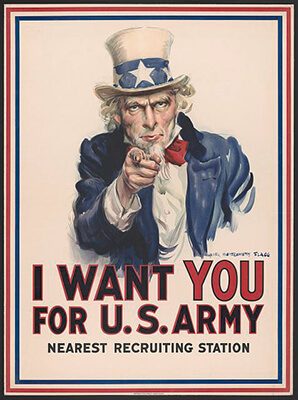 Isabelle Hervey Wing graduated Phi Beta Kappa from Colby College and came to Sherborn in September 1918 to teach at Dowse High School. The school had 2 teachers and 38 students but no electric lights, no hot water, and no flush toilets.

Belle met Johnny in the Cash Store four months later and unknowingly set herself on a path that never turned. “I met my future husband in December by dumping five hundred pennies from the Lunch Fund on his glass counter. Did you ever try to pick up coins from a glass surface? He said later he should have taken warning right then and there.”

John and Belle married in 1920 and Belle began a life of 100+ hour 7-day work weeks, open 6:30am to 9:00pm. The Sherborn Cash Store became Jackson’s Store, and John and Belle did their part to keep Sherborn fed by selling bulk groceries from barrels: flour, sugar, pork, salt, molasses, peanut butter, crackers, the staples. Help yourself and don’t make a mess. 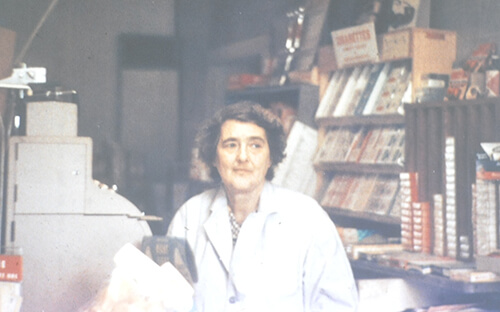 A hundred years before Amazon, the Jacksons did home delivery. Theirs wasn’t the first automobile in town: that belonged to Dr. Poor, Sherborn’s family physician, who according to the assessment book began paying excise tax on his car in 1906. But the Jacksons got a Model T and put it to use carting eggs for sale in Natick and making home deliveries. When the Model T got filthy – as late as 1937 only 7 miles of Sherborn’s roads were paved – the Jacksons washed it in Farm Pond.

As she did toward many aspects of her shop-keeping life, when Belle looked back on John C.’s delivery service she took a fatalistic view: “When he reached the houses for grocery orders he saw some very unusual sights, both ludicrous and gruesome. On more than one occasion he found a corpse from heart failure or shock. One poor woman, wife of a seaman who hadn’t been home for months, was dead in her bed while her little boy – under school age – was frantically keeping all the stoves going because she (had been) so cold.” 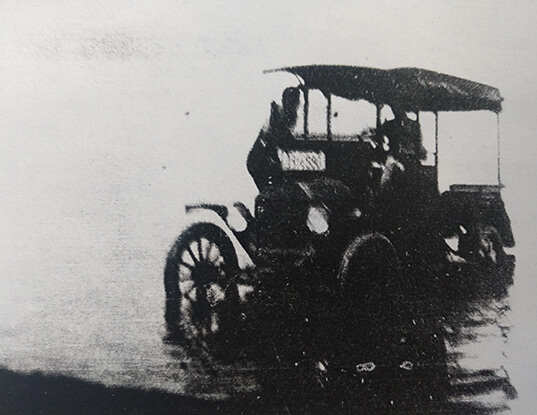 Business on a handshake

Commerce behaved differently in the early part of the 20th century. Barter, for instance, was a key component of Sherborn’s retail ecosystem. Jackson’s Store carried Shawmut Brand soft drinks from the P. McCarthy & Sons cider mill, also in Sherborn. The Jacksons exchanged groceries for McCarthy & Son’s cider, ginger ale, and orange, lemon and grape sodas. Between the Jacksons and McCarthys, Belle remembered, “Actual cash passed hands probably only once or twice a year.” The same applied to eggs, for which the Jacksons bartered groceries with Sherborn’s housewives. 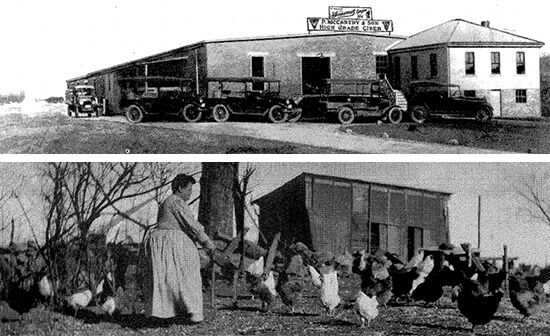 In 1963 remarks to the Sherborn Historical Society, Belle lamented women’s underappreciated contribution to America’s early 20th century economy. During and, paradoxically, more so after WWI, men were scarce when there was work to be done close to home:

“I’m going to try to explain to you why Jackson’s store is still in business in spite of some people’s opinion of its apparent disrepair and dinginess. In 1918 Sherborn was still a small town….The young men had come home from the war and tried to pick up what they had dropped when they enlisted….There was nothing in Sherborn for a young man. They had to find work outside, except those who farmed. After a few months it became obvious – to the people in the center of town at least – that when an emergency arose they could be sure of finding one man who’d help, and that was Johnny Jackson. The Selectmen appointed John C. Chief of the Fire Department. He was elected constable and drove a school bus at the same time, so to speak. Who can run a successful business and take on this “Mr. Sherborn” deal? Did he make a lot of money doing all these things? Ha ha!” 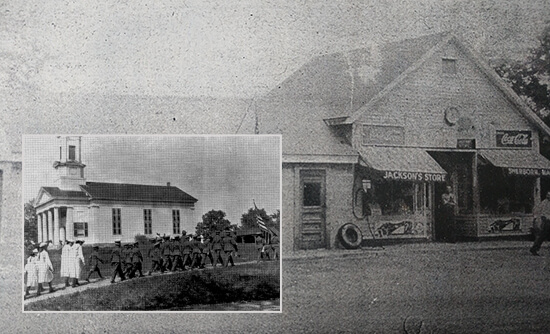 Fire Chief, constable, bus driver weren’t the end of John C.’s civic responsibilities. In 1938 the town appointed him Postmaster, and the Sherborn Post Office remained at Jackson’s Store until it moved to its present location in 1968 when John and Belle retired and sold the property.

Reflecting on her half-century of 7-day weeks keeping shop in her husband’s shadow, Belle told the Historical Society:

“No doubt the women of fifty years ago complained once in a while about their lot in life, but the ones I knew were worth their weight in gold.” 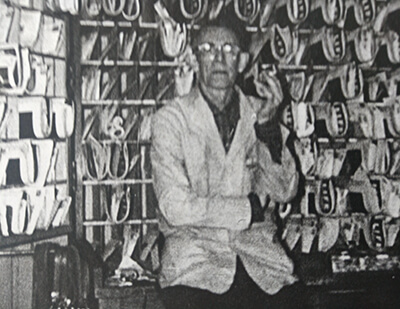 First demand, then supply. The Jacksons began selling gasoline in 1920 -- with a manual pump to dispense it. The technology around vehicle fuel storage and dispensing has improved a lot in a hundred years. Unlike the Jacksons early last century, today we have double-walled tanks and lines, fail-safe catchment sumps, a fire suppression system, automatic leak detection, and an emergency intercom system.

Later, the Jacksons added service bays and did car repairs. Sherborn Fuel is not in the repair business, but Sherborn and the surrounding community are fortunate to have Rose’s Automotive at 26 North Main St in Sherborn. Ed and Claudia Rose run a first-class operation and have done for many years.

For a time, John and Belle leased the store’s basement to a barber. A young Eliot Taylor (in later life, Sherborn’s curmudgeon-at-large) snapped a photo of himself holding a camera, the barber’s mirror reflecting Eliot, the barber, and an indifferent child sitting in the chair waiting for her haircut. 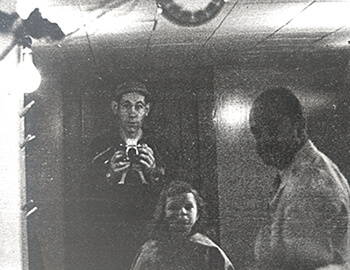 Belle Jackson had mixed feelings about children. “(C)hildren”, she told the Historical Society in 1963, “…didn’t have as much time or so many opportunities to make juvenile delinquents, but if there were any angels among them no one has mentioned them to me”.

“The little darlings – we do love them and have some charming pictures over the years – drop their popsicles, step on their chewing gum, spill their tonic, throw their candy wrappers and banana skins, distribute popcorn all over the place. If you do not trade with us because we aren’t tidy, we understand.”

But even for Belle, serving young people had its consolations. She described an “occasion to be long remembered. A little boy came in from Sunday School, bought his penny candy and paid for it with his Sunday School drawings. ‘These are for you, Mr. Jackson!’" 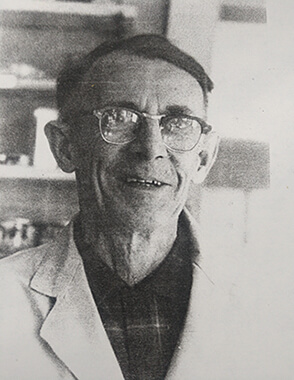 “From young shining youth to the worn-out old wrecks we are, we’ve done our best,” Belle told the Historical Society in 1963. “We’ve advised the young, helped the poor, befriended the stranger, comforted the sick and unhappy, lent or given away most of our material possessions, and we are content.” 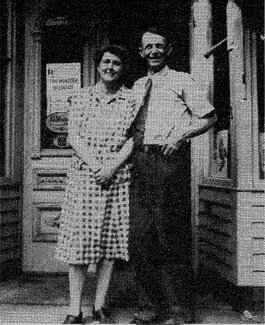 Thinly populated as Sherborn was then and remains today, since 1920 the town has had 6 separate locations selling vehicle fuel at one time or another. Everywhere you go these days, gas stations are fewer but much, much larger.

The Chevron corporation held the property until 1984 when they sold it to Bellingham’s Frank Paquette. In 1993 the Paquette family sold it to Sherborn’s own George Sturgis and his brother Rob.

Beloved as a perennially cheerful and instinctively generous (but rascally) figure in Sherborn, George died unexpectedly in 2007. The current owners took over in 2010, and like John and Nellie Peck Jackson and John C. and Belle Hervey Wing Jackson before them they’re a mom and pop duo -- with the mom half still wondering why she let herself go along with it. 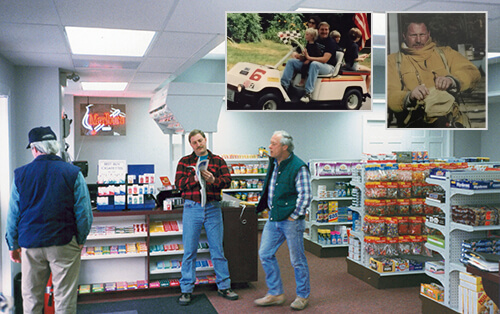 Hearty thanks to the Sherborn Historical Society for permitting access to their archives. Particular credit is due Bob Buntin, Betsy Johnson, Margo Powicki and Kitty Sturgis. For photographs of George Sturgis’s Citgo service garage and its 1993/1994 reversion to c-store and gathering place, thanks are due Bob Bradley, longtime member of the vehicle fuels industry and a loyal friend of George.

Did you know at Sherborn Fuel you can... 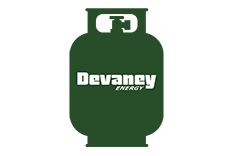 Refill your empty canister with propane from Devaney Energy? 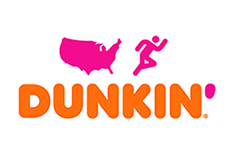 Refresh yourself with a Dunkin' coffee and breakfast sandwich? 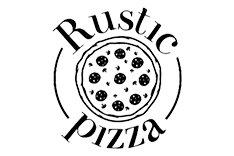 21 South Main Street
Sherborn, MA
508-655-3106
This email address is being protected from spambots. You need JavaScript enabled to view it.